NHC Beers Sent, and other updates

A quick up date. I sent my NHC 2nd round beers off to Minnesota on Saturday. It is a 100% Brett c. and 100% Amarillo hop beer, built around a Belgian Pale Ale base recipe. I still say that is one of the best beers I have brewed and making round 2 helps validate it.
I will also be brewing at least 3 beers before my wedding at the end of June. With wedding planning and such I have to find ways to sneak brew days in. My fiancee will be having her bachelorette party next weekend so I plan on brewing at least 2 beers (a wit, a hefe, and my next brett beer, or a berliner). I may try and brew one during the week but we will have to see.
I also brewed (not sure if that is the correct term) a batch of Viognier wine. It is my second wine, the first was a Italian Red and it was very nice. Viognier is one of my favorite styles of white wine. It is dry, but has a wonderful fruitiness. It kind of reminds me of what a good Belgian style beer is like, dry but sweet and flavorful. I hate dry mineral or metallic wines. It is one of the few whites my fiancee and I can agree on. The wine should be ready by the late summer early fall which are typically the hottest days in San Diego.
I will have a review of my Gose, and my IPA soon.
Posted by Jeff at 8:03 AM 2 comments:

Best Ale in the Universe 2- An American Peach Wheat 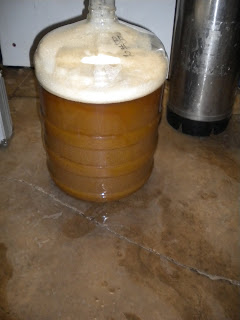 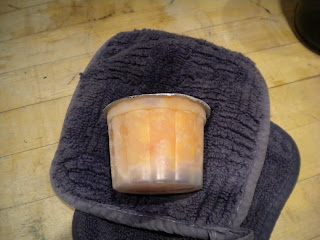 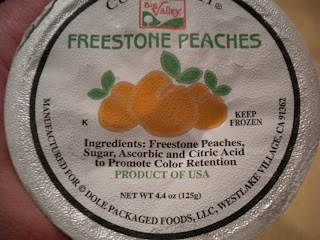 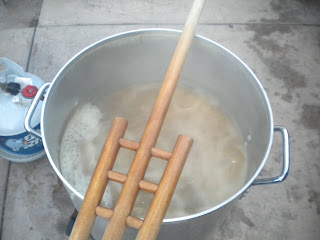 I am not bragging about the quality of the beer, the Best Ale in the Universe, but our school considers itself the Best School in the Universe, so I figured I would make a beer in our schools honor. This is actually the second beer I have made for work. I like to include a component of the school lunches into the beer. For the holiday party I brewed a imperial southern brown with graham crackers in the mash, it was a huge hit and was tapped in a about 2 hours.
When I got off work today I decide that I would brew a batch for my work's end of the year party. I brewed an American Wheat that I will be adding frozen peaches to. I will also be brewing a pretty standard wit bier, but that will have to come this weekend. The brewing session was pretty painless (although I forgot to add the final aroma hops at flameout)and a great way to relax after work. I even got a chance to workout during the mash rest. The peaches I will be adding are from frozen fruit cups, that have peaches, sugar and vitamin C (ascorbic and citric acid) see image below.
Best Ale in the Universe 2
4.5 # 2-Row
4.5 # Red Wheat
.25# Crystal 10L
.25# Honey Malt
Cluster @ 60 minutes 14.3 IBU
Hellertauer @30 min 7.4 IBU
Hellertauer @ 1 min left out!!!
WL American Wheat Yeast
( I used this yeast for a dunkle a year or so again, and it had a ton of apricot and peach flavor/aroma, it sucked for the dunkle but I think it will be perfect for this beer)
The beer will be 5% abv and so will the wit so they will be easy drinking refreshing beers to go with the street taco cart that we always have for the end of the year party. It should be a good party.
Posted by Jeff at 9:18 PM No comments: 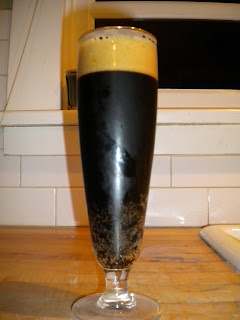 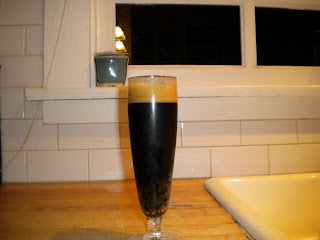 Here is a tasting of the second lager have brewed my Schwartzbier. I wanted a beer that was nice to drink as San Diego's freezing winter ends and the spring heats up. I have actually been drinking this beer for a few weeks now and I am really happy with it. I wanted to aim for a mixture of an American and German style, but my beer ended up on the more American style.
Aroma: The beer has a very clean aroma, with a slight maltiness followed by a light roast. No hop aroma.
Appearance: The beer has a very dark color, almost black until held to the light, when a garnet hue is visible. The head is dark tan almost espresso in color much more stout-like in color.
Flavor: The flavor is clean with very little Munich malt flavor, bummed about this. The dominate flavor is a nice bitter sweet dark chocolate/roastiness. There is not burnt flavors, but a little roastier than I had hoped for. The beer finishes with a slight roast derived dryness leaning towards astringency, followed by a light maltiness. No hop flavor detected. It does leave my mouth tasting like I just had a piece of 70-80% cocoa chocolate (which I love).
Mouthfeel: Nice medium body, with a strong carbonation. The beer, as mentioned above has a slight astringency.
Overall: The beer is a very nice beer, but not a "black Pils" due to the lack of hop bitterness/aroma and the fact that there is too much roastiness. I will reduce the roast malt and increase the dark Munich malt as a well as the hops.
Posted by Jeff at 9:08 PM No comments: 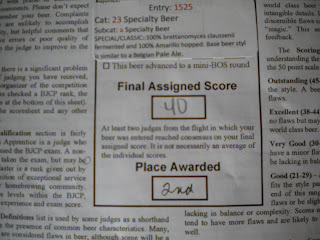 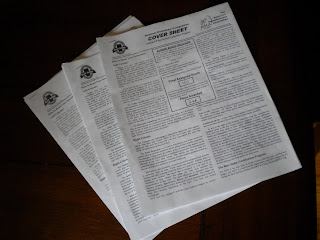 I received my results for the NHC first round on Thursday. I had never entered this contest before, but with a 2nd place finish in preliminary contest (America's Finest City) in February, I thought what the heck. I entered three beers; the 2nd place finisher a Dark Strong, Meyer Lemon and Lavender Blond, and my 100% Brett c. and 100% amarillo Belgian Pale.
For more info on my predictions for the beers going into the contest check out this earlier post
Unfortunately, my computer crashed earlier this year and I lost the recipes for all three beers, if any one wants more info let me know and will put together a recipe from memory.
Here we go:
Belgian Dark Strong: Category 18e. Overall Score 30.5 (29, 32). It scored a 35 in earlier contest. I originally brewed this as a Belgian BarleyWine, but after 18 months the hops have faded. The beer used a base malt of Marris Otter and the traditional Dark Strong grains. I think it mainly got marked down for the lack of esters. I really liked the marris otter as the base for this style, and the judges all said the malt was a highlight.
Meyer Lemon and Lavender Blond: Category 21a. Overall Score 28 (29, 27). Scored a 33 in earlier contest. Neva Parker of White Labs was one of the judges so I know I received some quality feedback. I didn't have too much hope for this beer but I thought if I specified the base style (forgot to do this in earlier comp) I would have done better. It is a good beer, and everyone who tries it really like it, but the lemon and lavender are a little too strong for the base style. I will brew this beer again because on a warm spring/summer evening it is very refreshing. As Ms. Parker said "just a few adjustments and this would be a fantastic summer refresher. The Champagne of beers-yum"
100% Brett c. and 100% Amarillo Belgian Pale: 2nd Place Category 23a. Overall Score 40 (40, 40). Scored a 24.5 in earlier comp in Category 16e. I was really disappointed in the earlier comp. I thought the style is very Belgian-like, but after talking to a friend who is a BJCP judge he advised me to switch to specialty beer. Good call Andy! The beer has been a big hit among other homebrewers who know funky wild beers and I feel this is the best beer I have ever brewed. So earning this score and moving on to Nationals is a great feeling. I got some advice from Sean Paxton The Home Brew Chef on this beer, so thanks Sean. I hope the beer does well, but I think the next level is gonna be tough. I will brew this again soon with Brett c. and Nelson Sauvin Hops. So look for a post in the next few weeks, I just have to source the hops.
On a separate, but related rant, I really think BJCP needs to update the guidelines to include wild, funky and non-traditional sours. If a beer can score 24.5 in a Belgian Specialty and 40 in Specialty beer there are some issues in the categories. I think that as the landscape of american home brewing changes the guidelines need to change to reflect that change.
Congrats to all the brewers moving on, especially all those who's blogs I follow, those I get advice from on the Babble Belt and to my own home brew club CHUG. We are a small club, only 15 people and have only been around for about 3 months. But at least 3 of us placed and are moving on to the NHC!
Posted by Jeff at 9:02 AM 2 comments: