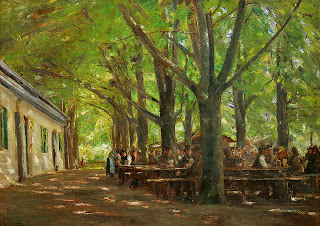 The painting above is from Max Libermann , a German Impressionist Painter, 1847-1935. The painting is of “Biergarten in Brannenburg”. To me the image evokes warm weather, and the cooling shade of trees as you sip on a crisp and refreshing beer. I can just imaging the people in the painting enjoying glass after glass of a pilsner. It was the inspiration for my pils. I hope to have this beer on tap at the height of the summers heat, as I sit in the shade of my back yard.
I have been on a real pilsner kick lately, even though the weather hasn't been the traditionally warm San Diego spring. In the past two-three months any time I am out and I see a true pilsner on tap, I order one. For some reason they have just been calling to me. I have not brewed that many lagers (4), and most of the attempts have been sub-par at best. I believe my biggest mistake has been the lack of attenuation due to pitching too little yeast. After doing some research this fall when my Octoberfest failed I have found many homebrewers use dry yeast as an alternative to starters made with liquid yeast. I will be testing this out on this batch using Saflager S-23. My luck with dry ale yeast has been great so I hope for the same success with dry lager yeast.
Recipe: German Pilsner Malt, Germna Munich Malt, and US Carapils. Saflager S-23, German Hallartauer at 60 and at 1 minute additions. 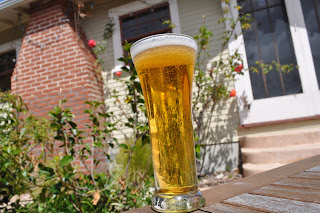 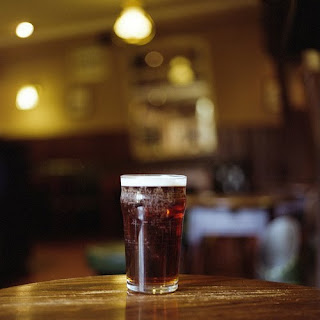 (Photo credit: http://www.flickr.com/photos/ronet/)
Last December I visited Magnolias Pub and Brewery in the Haight in San Francisco. This great pub and restaurant has wonderful food and even better beers. I have visited this pub twice and I have enjoyed the variety of beers on tap and cask. They seem to focus on lower alcohol English influenced styles, that lend themselves to food very nicely. Last time I was there I enjoyed a couple of pints of cask conditioned Bitters and Milds. The Dark Mild in particular was extremely well balanced and easy to drink. The fact that I had a couple of beers in the middle of the day and wasn't feeling the booze was nice and allowed for more sightseeing.
I decided upon my return from that trip, that I would work on making some lower alcohol English styles ales this year. First up was a Dark Mild. I named this beer after our Calico Cat Maulee, as she is full of attitude (flavor) and yet still very mellow (low abv). It just seemed like a fitting name for a beer shooting for great flavor and low alcohol.
I kegged it up and and poured a glass, the beer was almost exactly what I was looking for, except it seems to be a little too roasty. Not harsh but a little astringent. I'm thinking that this came from the combination of malts that I used, all are described as giving a nuttiness, roastiness, and coffee-like flavors.
Recipe: 60% Marris Otter, 27% Brown Malt, 6% Crystal 120, 3 % Dark Crystal, 3% Turbinado Sugar. Fuggle at 60min, and Fuggle at 20min. White Labs 023- Burton Ale. 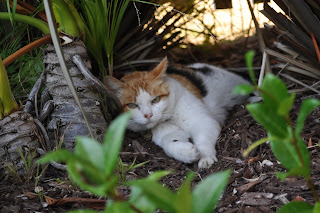 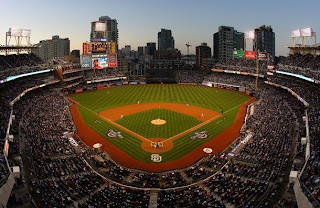 Opening Day of Major League Baseball is quickly upon us. The teams are spread out in the warm lower states, mainly Arizona and Flordia getting ready for the season. I have the first week of April off for spring break and Padres home opening day is that week. My buddy got tickets for us so I want to have some beer to drink before we walk down to the stadium to watch the Padres beat the World Champion Giants.
I wanted a beer that is in the style of San Diego Pales and IPAs, light in color and full of late citrusy hops
. I wanted it to be on the lower end of the abv scale so I could drink a few after work while watching the Padres play. I had some Citra hops and wanted to do a 100% Citra pale, but I didn't have enough (only 2oz whole hops) so I used some Nelson Sauvin for the bittering charge. I read an article about Kern River Brewing (who make some awesome Pales/IPAs) who are using Honey malt as a way to add some sweet maltiness, but still allowing for a dry finish. I have started to use thin some of my beers and I have found it works pretty well.
I have also started using dry yeast for any beer where I am not looking for a specific yeast profile. I find that the dry yeast is clean, easy to use (no starter) and attenuates really well. I wish someone would make a dry Saison yeast!
Recipe: 2-Row, Honey Malt, Crystal 40. Nelson Sauvin bittering, Citra (10, 1, Dry Hopped). US-05.
Posted by Jeff at 11:48 AM No comments: 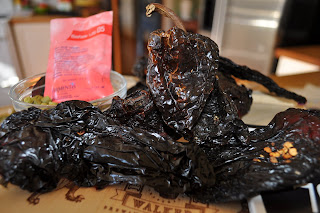 I originally created this recipe to be my Christmas beer. It was going to be called Feliz Navidad and be a beer inspired by Mexican Hot Chocolate. I have had this beer in mind for about 3 years and I did a small test batch a few years back. I would incorporate ancho chilies, cocoa nibs/powder, and cinnamon. I figured a malty amber, stout or porter would be a good base to stand up to these flavorful ingredients. I chose an amber to try first and added some chocolate malt and special B to match the chocolate and raisin flavors of cocoa and ancho chilies. When the beer was finished fermenting I racked into the keg and placed 4 large ancho chilies, that were de-stemmed and deseeded to my dry hop bag and placed them into the keg to dry-chile the beer. I had them in the keg for 10 days and then pulled them out and sampled the beer. It was not spicy at all but had a great ancho aroma and flavor. The beer was so great as is that I decided to save the chocolate and other spices for another time. The beer is a big hit with all of my friends and family (including those who are BJCP certified) so I am going to enter it in this years NHC.
I will brew a stout or porter with the anchos, cocoa, and spices for Christmas next year.
Recipe: US Pilnser malt, Germna Dark Munich, White Wheat, Special B, and Chocolate Malt. Check Saaz bitering, and Golding for flavor. US-05. Ancho Chilies.
Posted by Jeff at 11:33 AM 6 comments: 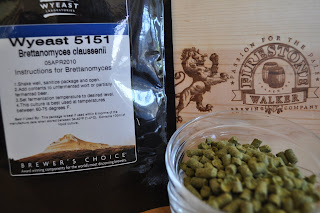 100% Brett claussenii and 100% Nelson Sauvin hopped beer. This is my second all brett, single hop beer. The last batch of BRETT!!! was 100% Brett c. 100% Amarillo and it was an awesome beer. It took 2nd place in the Southwest Regionals at last years NHC, and earned a Honorable Mention in the second round of NHC.
I love this style of beer, last month I finally was able to try Sanctification, Russian Rivers 100% Brett beer. It is dry, tart, funky, fruity and just delicious. I was inspired to make this series of beers by Sean Paxton (The Homebrew Chef), Tomme Arthur (Lost Abbey), Michael Tonsmeire (The Mad Fermentationist), and The Burgundian Babble Belt (100% Brett Discussion). I named them after my big hairy, funky friend Brett, who's mom would yell from the back of the house for him in a gutural BRETTTTTTTTTT!!!!!!!! when he failed to complete one of his chores. I plan on continuing to beer this series of beers once a year, changing the brett species, and hops each time.
When I make these beers I stress the yeast so they produce more sour, tart, fruit flavors. I do this by not making a starter and just pitching the pack of yeast. I have had a few 100% brett beers from the Bruery who make a starter and I find them nice but too clean for the flavor profile I am looking for. Sean Paxton used a similar method in his Sonoma Pale Ale, not pitching a starter of Brett a.
In addition, I will be changing the way I post recipes to mimic a new homebrew blog I found called Hopfen Treader. His post are all about the inspiration and background and not recipe, numbers based. I find it a little more fun and easy to read (let alone easier to post). I have decide to post this way because my favorite part of homebrewing is recipe creation (and drinking the final product of course). Let me know what you think.
Recipe: 2-Row, Carapils, Crystal 120. Nelson Sauvin hops (60, 20 Flame out, Wyeast Brett claussenii.
Posted by Jeff at 10:19 AM 3 comments: