I always hate it when a blog I love following doesn't post in a few weeks, well I am now the guy I hate. I have ben super busy lately working, coaching two high school track teams, planning a wedding and buying our house. Needless to say brewing and blogging about brewing has had to take a bit of a sideline. I decided to do a quick post and update about what I have been up too brewing wise. I have my Schwartzbier on tap right now and it is really tasty, a little too roasty but really good. I have my gose carbed and waiting for the warm weather to stick around before I tap it. I have my IPA in the keg and I was hoping to have it on tap this weekend but I have a CO2 leak somewhere in my lines and so I went through 10lbs. of CO2 in about two weeks. I have my RIS kegged and conditioning and wells as the 2nd runnings from that, a beer I called a roasty mild. I have my Orval-like beer in primary still and that will keg as soon as a keg opens up. It will be dry hopped and should be great this summer. I also have a funky sour squash saison, a funky sour dark saison, a flemish sour in secondary. I will probably hold off on these until after summer. I also tasted and got a FG reading for my Dortmunder Export, wow super tasty. I was a guy who never really liked lagers but I have now made three and they are kick ass and super tasty.
I am starting to plan out my next few brews. I plan on a wit beer, a thai influenced beer (wit, saison, or blond), a berliner, a peppercorn saison, and another all brett pale using brett c. and nelson sauvin hops.
The peppercorn saison was inspired by a recent trip to Boston with my fiancee. We made a stop at Cambridge Brewing Company one afternoon for lunch and I had a sampler of all their special draft beers. The two highlights were the peppercorn saison, peppery spicy goodness, and their oak aged bock. The day was warm but this beer was so rich and tasty. They age it on untoasted american oak and medium toasted hungarian. Both beers were just outstanding.
Pictures: a couple of pints of my Light American Lager, taking a OG reading of my Dortmunder Export, my Fiancee at Cambridge Brewing Co., The Beer Menu at Cambridge Brew Co. 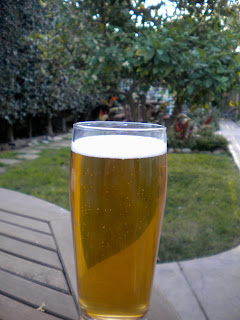 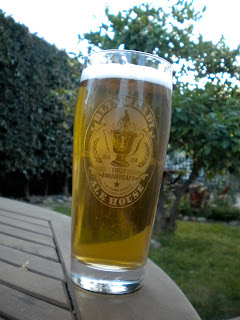 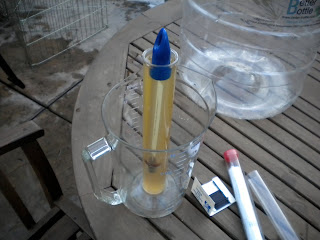 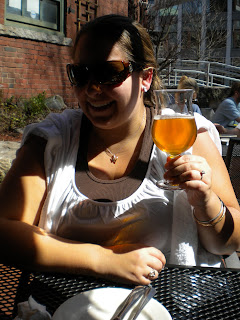 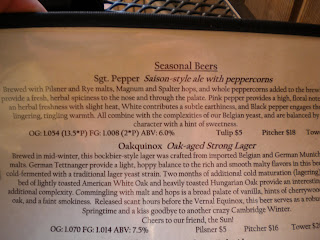