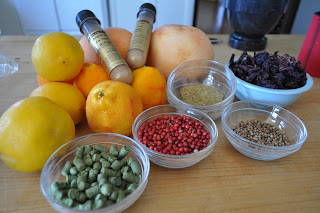 My best friend's (and long time brewing partner) sister and her husband are having a baby girl. They asked me and my buddy to brew a beer for their coed baby shower next month. We talked at length about who would be attending, the weather, etc. During the early recipe development we didn't know if the baby would be male or female so we put together 3 versions of a wit beer. The first is a traditional wit with coriander, chamomile, and citrus zest. The second in honor of a boy was going to be a blue wit with standard spice additions, but add blueberries in secondary. The third in honor of a little girl would be a pink wit with coriander, pink peppercorns, and hibiscus flowers in secondary. We found out a couple weeks ago that the baby was female and so we decided to brew 10 gallons of wit; 5 that would be
traditional and 5 that would be pink. We did some tasting of Dieu Du Ciel! Rosee D'Hibiscus which was very nice and pink, so we thought let's do this.
We brewed on April 10th, a day after the great brew master and man who brought wit beer back into popularity, Pierre Celis had passed away. A wit beer for a new life as another leaves, pretty deep for a homebrew.
I used the same base wit recipe I have always used in the past. In the traditional version I used coriander, chamomile, the zest of 2 grapefruits, 4 tangerines and 3 homegrown Meyer lemons (3.8 oz total). This blend of citrus zest gives a great bitter and sweet combination that I feel is way better than the Curacao versions.
The pink wit uses coriander for a citrusy fruitiness, pink peppercorns for a sweet zesty citrusy peppery flavor, and hibiscus that will add a tart drying sourness, in addition to a great pink color. For the hibiscus we will be using a steeping method I saw on The Mad
Fermentationist. I think this will give us an ability to make the hibiscus flavor and aroma really pop because very little of the flavor or aromatics will be lost in the boil or the primary fermentation. We can also adjust the color and flavor with this method.
All in all, I wanted two beers that will be three things; 1) A beer that us approachable by people who are more often Macro drinkers (Blue Moon included). 2) A refreshing beer to quench your thirst on a warm May afternoon and 3) a beer that will celebrate my good friends new family member.
On a final note, I would like to thank and remember Pierre Celis for re-establishing wit beer, one of the world's refreshing styles that we almost lost. I raise a glass of New Belgium's Mothership Wit in your honor.
Recipe: Belgian Pilsner, White Wheat, Flaked Oats. Traditional Version: Coriander, Chamomile, Grapefruit, Tangerine, and Meyer Lemon zest. Pink Version: Coriander, Pink Peppercorns, Hibiscus Flowers. 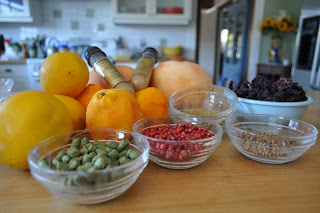