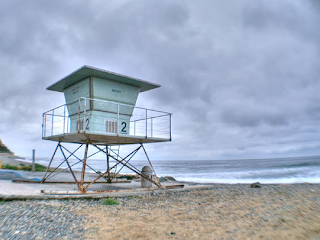 Hefeweizen was the first beer that I ever made that was a true success. I even won my first award with my first Hefeweizen. The beer was a huge hit with my friends and family's well. The first batch I made was back when I was still an extract brewer. I tried to make an all grain Hefeweizen a few years back, but it just didn't come out the way it should have. I didn't do a deccocotion and I think that was one reason it didn't come out the way it should have. Iread that you could get a great Hefeweizen from extract, and my earlier batch supported that theory. I decided I would give an extract Hefeweizen another go. It's a simple recipe and it was great to knock out a batch in about an hour and a half.
The name comes from the westerly winds that blow on shore off the Pacific Ocean. These winds will often bring in coastal clouds, that are murky and cloudy, much like a hefeweizen. These clouds are most prominent in spring and early summer, commonly referred to as May Gray and June Gloom. Weather like that reminds me of a refreshing hefeweizen.