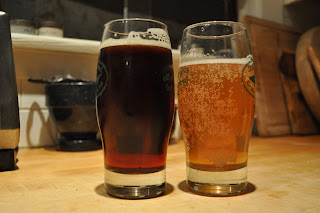 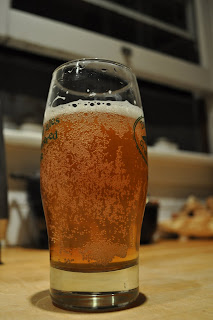 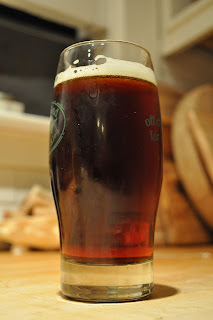 I finally got around to do a tasting of these two beers that brewed within the last couple of months.
Hefe (aka Game Day Wheat)
This beer was brewed back in August. Three things made this beer nothing like I wanted it to turn out. 1) The summer here in San Diego had been record breaking cool, so I figured i could go for a nice bavarian style hefe without any real temperature control. 2) I also used a slightly different yeast than I normally do for my hefe's. 3) I brewed this 3 times previous but as a extract/steeping grain recipe. I had never done it as an all grain batch, nor did I do a deccoction.
The beer turned out much more like a American Wheat, not sure if this was due to any of the factor's listed above or any combination of them. Even though it didn't turn out like I wanted it to, the beer is highly drinkable and has become a favorite among friends while watching Charger games. i figure the keg will kick here in the next week or so, so I decided to do a review now.
Appearance; Slightly hazy straw colored, with a nice white head (my pressure is low on that keg right now so the head looks much smaller than the other day).
Aroma: Sweet fruits, but not any particular fruit. There is a tart-wheatiness and some low level spicy phenolics.
Taste: Very similar to the aroma, except the wheat is much more present and the fruitiness takes on a apricot-like flavor. It finishes with a slight tartness and again some low level phenolics.
Mouthfeel: Light and refreshing, with a good carbonation. The only thing is that to me the weird phenols stick in my mouth making the beer seem heavier.
Drinkability: Okay, when the beer is cold and its warm out this beer is very drinkable, but as it warms the weird phenols start to over power the finish and make it less drinkable. My friends like it and drink it without complaint.
Festbier:
I brewed this beer back in September and hoped to have it ready by Halloween. Well that didn't happen and I just got it on tap about a week ago, in time for Thanksgiving dinner. The problem was that I have only made a few lagers and I am learning a bunch about them as I brew them. I have brewed a Light American lager and Dortmunder. The fest bier made me realize that I haven't been making large enough starters even though I have been doubling or tripling what I normally would pitch into a high gravity ale. The fest beer took for ever to get to an adequate final gravity, no where near where it should have been, but close enough and long enough I didn't think it was worth letting go any longer. The beer is nice and I can't wait to try this again with a different yeast approach. I will be trying to brew my lagers using dry yeast or slurries from local breweries. The dry yeast experiment will be up soon. I got this suggestion after posting on a few HB forums.
Appearance: Deep amber/garnet in color. Very cool color if not a little dark for the style. I think the color is perfect for what I was going for. The head is a light tan and it is thick and fluffy, more like a nitro stout head than a regular CO2 beer.
Aroma: Sweet dark bread and malt, with some fruitiness. No hops, or esters.
Taste: Rich munich malts, dark bread, some slight meledonins and a sweet finish. This is the beers only flaw, the sweetness that the beer finishes with. I tasted this same thing in my earlier lagers but because one was so light and the other had enough hops it didn't really distract from them too much. this beer, being rich and caramely by nature really shows the lack of attenuation big time. It tastes good but is too sweet.
Mouthfeel: The beer has a nice richness and is light, but the cloyingness of the finish makes the beer seem bigger than it is.
Drinkability: Again the beer tastes great until the finish and although the sweetness isn't a terrible flavor, it definitely makes the beer too filling and takes away from its drinkability. I can only have like 1 maybe 2. A fest bier should be dry and you could easily consume liter after liter. I like the recipe and will attempt it again this summer with dry yeast, in time for the first cool fall nights!
Up next RIS tasting, I promise and two new beers to be brewed asap!
Posted by Jeff at 9:02 PM No comments:

Here is the next beer in the Best Ale in the Universe series. I wanted to use raisin and made a beer that people who are not really beer drinkers would still like. I though about a dubble style beer, but decided on something a little more fun and adventurous. I thought a Brown Porter would be a good base and then I would throw in some raisins and rum. I kept the base recipe and then created a puree of caramelized raisins (caramelized in second runnings wort, and a little bit of Old Mill Rum.
I will then add rum soaked raisins into secondary along with some of the rum.

Mashed in at 152F, Batch sparged, 75 minute boil.
The wort smelled and tasted awesome and I can't wait to see how this beer turns out.
I was trying to get this batch of beer made quickly so I could watch some football and make some ribs. So no pictures this time.
I have the week of Thanksgiving off and I plan on brewing my second 100% brett beer. I will use brett c. and Nelson hops. I hope to bre wanother beer as well, not sure what yet, maybe my a rebrew of my RIS. I will also be doing some tasting reviews, bottling up some beers for the Bruery's 300th batch comp. http://www.thebruery.com/batch300/index.html. I also inherited a new chest freezer, which will become my new fermentation chest!
Posted by Jeff at 3:52 PM 5 comments: