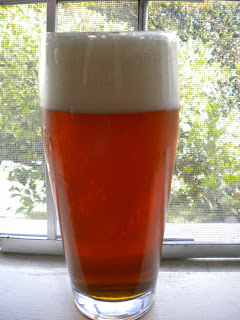 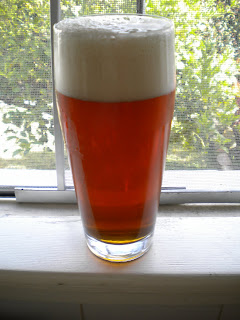 I brewed this beer a month or so back, so the hop profile has faded a bit. I don't typically brew IPAs because living in San Diego I am surrounded by exceptional commercial IPAs all the time. I am also very picky about my IPAs. I like my IPAs to be dry, light colored, lower in bitterness, and have intense hop aroma and hop flavor.
Appearance: Light copper in color (still too dark in my opinion). Large off-white head that lasts a long time. Clear.
Aroma: Big apricot/peach aroma with a nice citrus background, strangely as the beer warms a light grassy like aroma develops. A light sweetness lingers as well.
Taste: Nice fruity, citrus flavor up front followed by the same grassiness mentioned earlier. I think I left the dry hops in a little too long.
Drinkability: Drinkable and actually pretty good, just not what I wanted or had envisioned when I built the recipe.
Although it isn't exactly what I wanted it is the best pale/ipa I have made so far. I am getting better at the style. I probably won't brew another until the late fall. Next time look for Amarillo and Cascade hops, and just pale/pilsner malt to keep it extra dry and light in color. I may even throw in a little sugar like I do for my Belgian styles.
I may not get a ton of post in the next month or so as I am getting married in two weeks and then we are off on a 5 week honeymoon to Vietnam, Thailand and Cambodia. I will then brew heavily again in August.
I kegged up the two beers for my work part a American Wheat with Peaches (very fruity and slightly tart) and a basic wit (very nice beer and when cool and carbed it is gonna be a hit). Look for a review...if I have time. Thanks for following and see you all in August.
Posted by Jeff at 6:15 PM No comments: 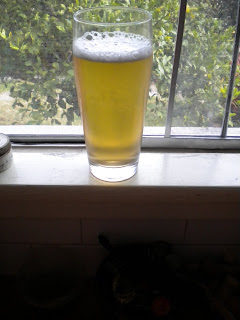 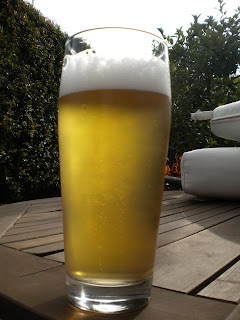 I brewed this Gose about a year ago with the yeast cake from my Berliner Weiss. The beer was accidently infected with Brett (probably brett c. during secondary) The grain bill was simple 3.5# Pilsner, 3.5# Wheat Malt, a small amount of aged cluster hops in the mash, brought to a boil, salt and coriander added at flameout. I lost the details when my computer crashed in the fall. This is definitely a great beer which I will brew again this summer.
Appearance: Light yellow/straw in color like a really light beer. Slight haze from the wheat, but this beer has been sitting for 8 months or so. The big evervessent head disapates very quickly.
Aroma: Lactic acid and grain in the aroma. Slight herbal note from the coriander but coriander aroma has faded over time.
Taste: Bright lactic acidity, very sour at first taste but then mellows after. A funky and malt/grain flavor follows. The finish is tartness, coriander, and a slight saltiness in the end. You can only taste the coriander/salt if you know it is there, which I guess is a good thing.
Mouthfeel: Evervesant, with a tart mouth puckering dryness. Easy to drink.
On a side note, if you blend 3/4 Gose with 1/4 IPA it is really good.
IPA review up next.
Posted by Jeff at 5:27 PM No comments: