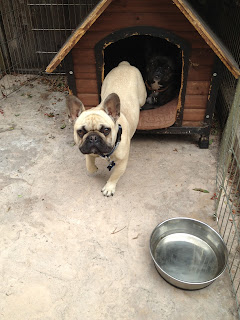 This is my second version of a session IPA or an iPA, named after my french bulldog Charger. He is older now, but this high flavor, high hopped, low alcohol IPA fits him perfectly. I really want a beer that I can a number of at night after work and not feel the effects of. I essentially just lowered my basic IPA recipe malt bill, and added as many hops as I would in a stronger Pale Ale or a smaller IPA. The last version was bitterer with Warrior and then Hopped with Nelson at 10 minute intervals the last 20 minutes of the boil. I also dry hopped the original with Nelson. The beer got some good feedback at a homebrew club meeting, but some said to call it an IPA it needed to be more bitter. I don't normally like IPAs that are too bitter, I enjoy the late hops that give aroma and flavor, but I guess that their opinions have some merit. For this version I kept the alt bill the same, but for the hops I wanted a slightly different hop profile. I really wanted a more tropical and citrus profile. I bitterer with Falconer's Flight to get a tropical and citrus background, with enough bitterness to call it an iPA. I then used a blend of Motueka, Rakau, and Amarillo at 20 and 10. The Motueka gives citrus notes of lemon and lime with a tropical fruit aspect as well. The Rakua gives more tropical fruit (this hop smelled fabulous when I opened the bag) especially passionfruit, and possible peach. I may use the Rakua as a single hop for my net 100% Brett beer. I used the Amarillo in these two add-ons to add some orange/citrus to round out the fruity profile. The last addition was just 50/50 Motueka and Rakua. I also plan on dry hopping this beer with these hops.

Biere De Garde - A Farmhouse Ale of a Different Color 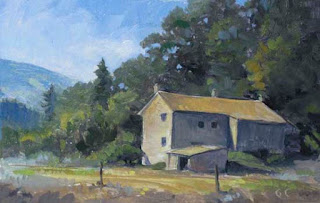 Today I brewed a Biere de Garde. This is a style that I have wanted to brew for some time now, but I just haven't gotten the chance to do it. Biere de Garde is in the same family of beers as Belgian Saison. Biere de Garde is a farmhouse ale from Northern France. Both of these beers were originally brewed on small farms to supply the local population with beer to drink after working long days on the farm, or so the story goes.  Biere de Garde is a tough style to find commercial examples of. Luckily, the Lost Abbey here in San Diego makes a very nice example of the style in its Avant Garde. Avant Garde is brewed with Lost Abbey' s house lager yeast, fermented at hybrid ale/lager temps. Since commercial examples are so tough to find, another important resource is Markowski's Farmhouse Ales. This book does a great job explaining Biere de Garde, which can be a very difficult beer to describe, since very few commercial examples exist and very little is known about the original versions of the styles. In general the more modern versions are clean and malty, with a moderate hop profile. Markowski argues that much like early Saison's,  Biere de Garde was a farmhouse product, and probably was brewed with what ever grain, hops and yeast were available to the brewer. In addition they probably had some contamination of wild yeast or bacteria. I couldn't decide which route to go with, modern or traditional. Since the few commercial versions I have tried were the modern version (excluding Jolly Pumpkin's Biere de Mars). I wanted to ferment the beer with White Labs French Ale Yeast but since it wasn't available at the LHBS, I went with another neutral ale yeast, White Labs European Ale. This yeast ferments clean, and will enhance the malt profile of the style. I am thinking about pulling off a gallon or so of this beer and adding some wild yeast to get a more traditional version of the style. This beer had amazing amber color and I look forward to see how it turns out. The last characteristic of Biere de Garde's is that they are Guarded or aged for long periods of time to mature and smooth out the rougher edges. I will be aging this one for at least 2-3 months after primary fermentation is complete.