Well I have been super busy, and just a bit lazy about updating the blog. I see that the last real update came in April. I have brewed 5 beers in that time. Four of those beers were served at various celebrations (work party, weddings, and rehearsal dinners). Those 4 beers were all served within a month of each other so I had to be on a tight schedule to make sure that the beers I was providing for the events were ready to go on those special days.

Those beers include the following beers, with quick descriptions. If your interested in any details leave a comment and I will expand:

Blonde: basic recipe, third batch, and it amazes me how awesome this beer comes out, I think this will become my base pale sour beer.

HopBrosia IPA: A basic IPA with all the hops I had that don’t have dank, pine and resin. I wanted a “fruit salad” flavor and aroma. Hopped with Amarillo, Citra, Mosaic, El Dorado, Huell Melon and Galaxy. I also used the Vermont Pale Ale yeasty from the Yeast Bay. The beer was young and it was a bit muddled, but overall a nice drinking beer.

Wedding Day Pale Ale: Basic pale ale recipe of two row, honey malt and victory. Hooped with a CTZ bittering charge, followed by Chinook, Amarillo and a bit of Citra at flame out. Great base malt to balance the nice piney, grapefruit, citrusy hops. Really happy with this one and I will be making the malt profile my base pale ale recipe. I also added grapefruit zest at flame out.

Cerveza de Jamica: This was for a rehearsal dinner that they served Mexican food. I wanted to make a beer that was fun, refreshing and went with the Mexican food theme. I modeled the beer after the traditional Mexican aqua fresca Jamaica (hibiscus flower tea)The base beer was a wit (although this could have been my basic wheat beer recipe) after fermentation ended, I added 1 pound of dried Jamica flowers. The beer instantly turned a bright pink, see the pictures below. I racked off the flowers after two days and then added a hop sack with a whole hand of fresh ginger (sliced), three cinnamon sticks, 5 cloves and 5 all spice rounds. The spices didn’t really stick out to me even after two days in the keg. The beer was magenta in color, tart, refreshing and a huge hit. 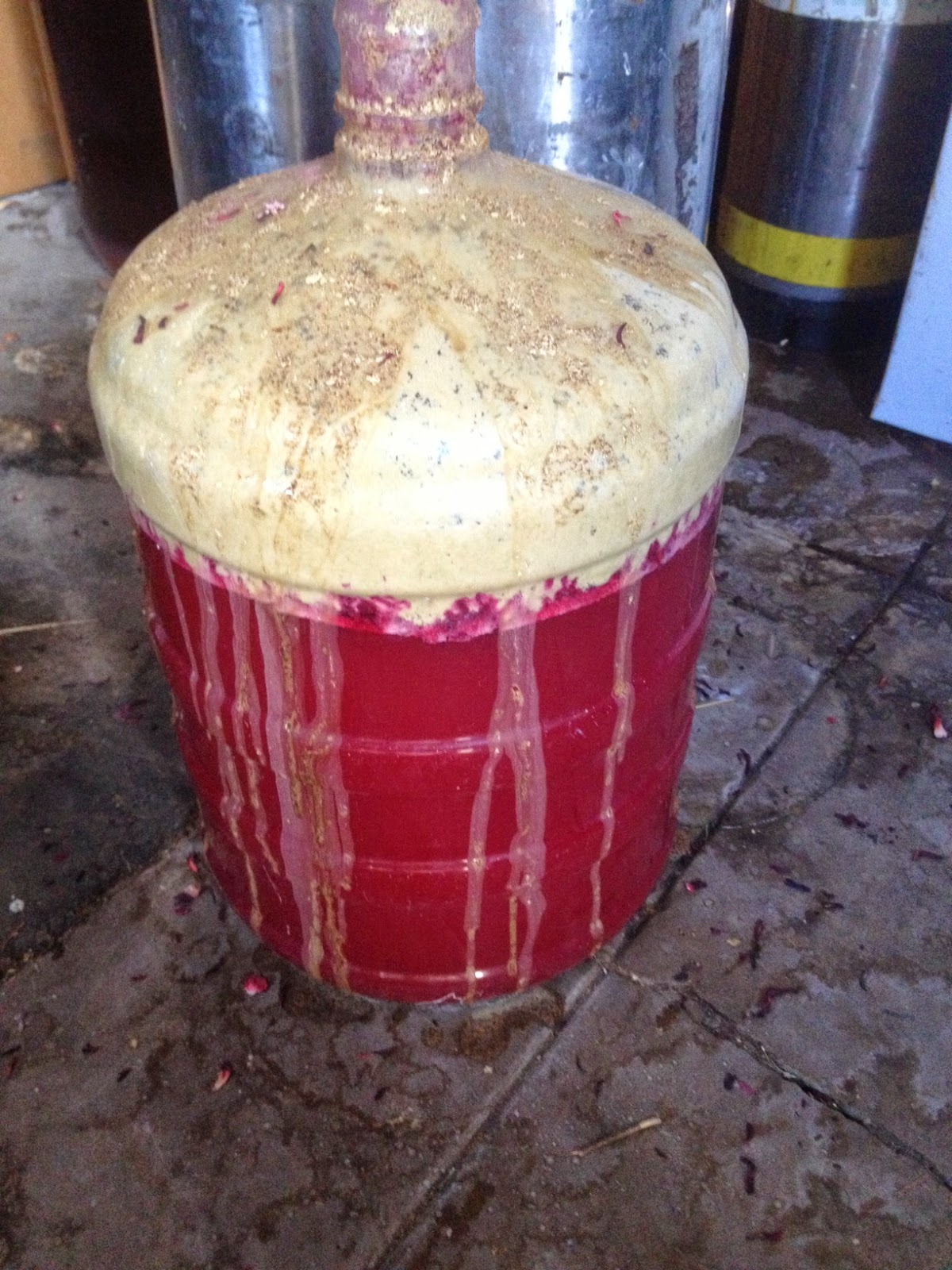 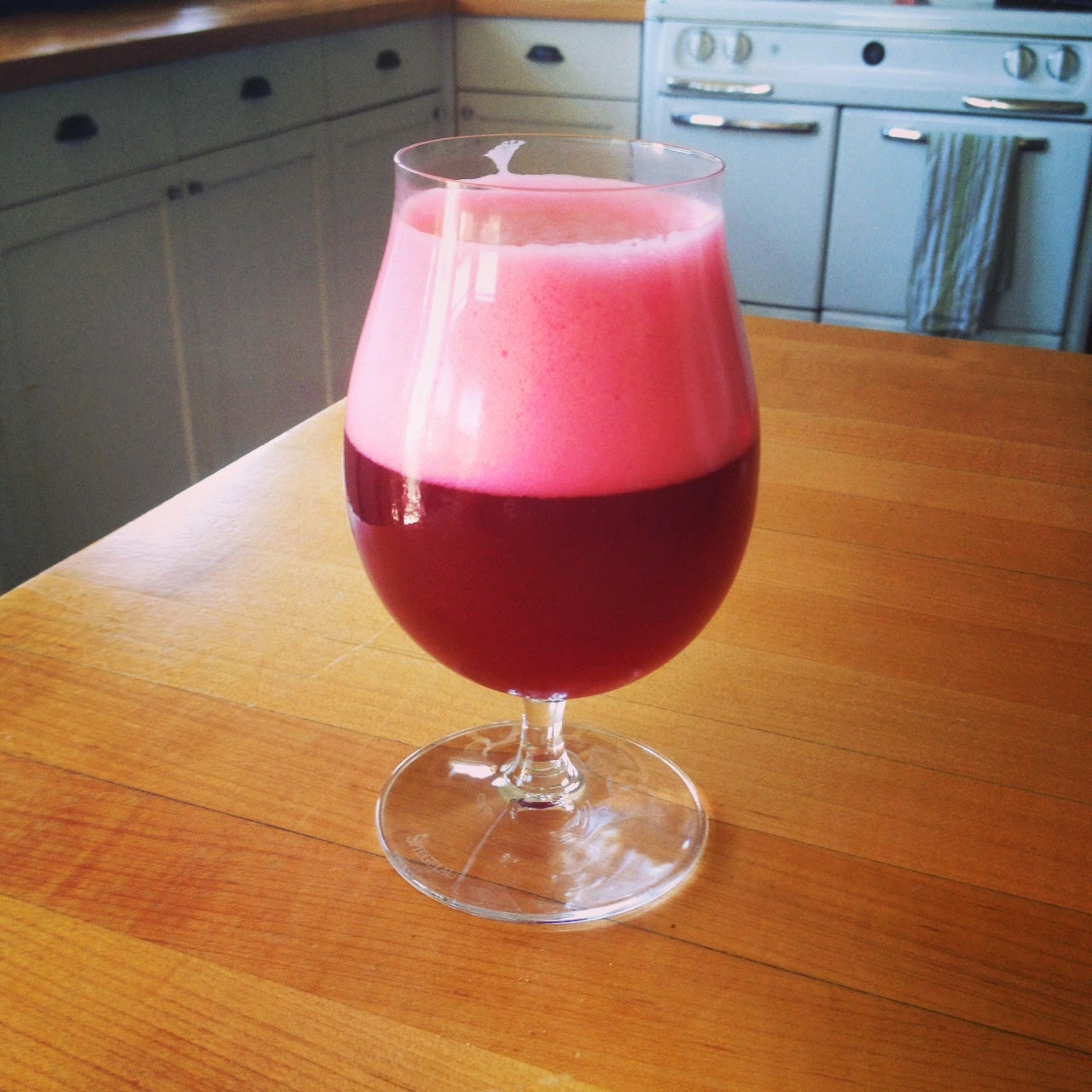 I got my results back from the NHC, and my Hoppy Wheat: Hot Curl entered into American Wheat beer got great feedback from the judges, but they said it was too hoppy for the style. It would have been marked down in the IPA category for being cloudy. Not too surprised but I was glad to hear they are expanding several of the BJCP categories. My cucumber saison did well, but unfortunately it didn’t make it to the next round in the veg, beer category. I probably need it too dry out a bit more for a saison.

I have been reading Mike Tonsmeire’s of the Mad Fermentationist Blog new book American Sour Beers: Innovative Techniquesfor Mixed Fermentations. Reading this book has re-inspired me for sour funky brewing that I had stepped away from as of late. Mike’s book is awesome and super helpful. I highly suggest it if you are brewing sours or are thinking about it. It’s a great addition to Jeff Sparrows’  Wild Brews Because of finding my inspiration I have also been messing with my sours that range in age from 5 years to 1+ years. I will post a second update regarding my sours soon.

Looking forward to brewing lots of beer this summer. I start my Doc program in the Fall, so I am not sure how much time I’ll have to brew in the next three years.
Posted by Jeff at 8:45 PM No comments: