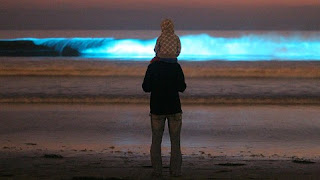 My good friend Nick is turning 32 this coming weekend and when his wife asked him what he wanted to do for his Birthday, he said, go to Jeff's house, drink homebrew and watch football. Sounds like a good time to me! I decided to brew a beer for the event, and when I asked Nick what he wanted, he said a brown or a red. I was inspired to brew a red after having a couple of great commercial versions lately, plus I have never made this style. I wanted a beer that balanced carmel, toffee-like flavors with a nice citrusy, piney aroma and flavor. I didn't want the beer to be too bitter, and I wanted it to finish somewhat dry, even though it has a well rounded malt profile. The one thing I am not sure of is whether or not I will get a nice deep red color or not. I know that there is a CaraRed malt, but my LHBS didn't carry any and I didn't want to order any online.
I called the beer Red Tide because the week that I brewed it San Diego was having a bloom of plankton (dinoflagellates) along our coasts that is called a Red Tide. The coolest thing is that when this particular red tide occurred the plankton have a secondary effect of bioluminescence. This mechanism acts as a predator avoidance technique. When these plankton are disturbed, by wave action or human interference they bioluminesce blue. I have linked a cool video here
The beer smells amazing, and I will transfer it to a keg tomorrow. Hope it is red, but even amber will be okay.
Recipe: 2-Row, Crystal 60, Dark Munich, Victory, and a tiny bit of Chocolate Malt, US-05, Northern Brewer @ 60, Amarillo & Cascade @ 15, Amarillo & Cascade @ Flameout.
Posted by Jeff at 8:20 PM 1 comment: