Last month I had the opportunity to go and help my friend Derek brew a fact of beer at Monkey Paw Brewing Company in San Diego. Derek has been brewing at Monkey Paw for almost a year and already he is getting wonderful reviews. I have know Derek for about 4 years, we met through home brewing and  he was the creator of our homebrew club CHUG. I was able to help Derek brew his Rich Man's IIPA. It was  great opportunity to learn and experience what brewing on a commercial scale was like. The brewery is tiny and with all the kegs, grain and storage there is little room for much less. The biggest thing I noticed was that the process is much more hands off than homebrewing, most of the time you are pushing buttons and turning valves. The hardest part was using the clamps to run hoses from outlet to inlet. I also noticed how long the process takes. We started to mill in at about 9am and I left around 5:30pm leaving Derek with a small amount of clean up. I learned a bunch and really gained a greater respect for commercial brewing...these guys work extremely hard. In addition to brewing I helped Derek fill kegs, clean tanks and manage inventory. He is not only the head brewer, but the bar manager for the pub.
The other cool thing that occurred from this particular batch of beer from Monkey Paw was that during the CBC the mobile canning unit called the Can Van came to Monkey Paw and Derek and owner Scot Blair canned three batches of beer (Rich Man's, Oatmeal Pale Ale, and Sweet Georgia Brown). This beer was officially the first beer to be canned in San Diego, well at least since Aztec and Mission Brewery (the originals) closed in 1953. I was able to buy a couple of four packs at one of the local beer stores Bine and Vine. I enjoyed the fruits of my labor (well mostly Derek's, although I did clean out the mash tun) on my front porch the other day...it was great feeling and  great way to end a long week. 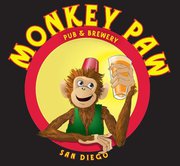 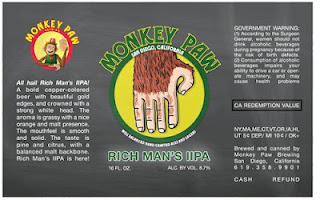 In short, this was great day spent with a good friend learning about professional brewing.

Thanks Derek!
Posted by Jeff at 8:25 PM No comments: