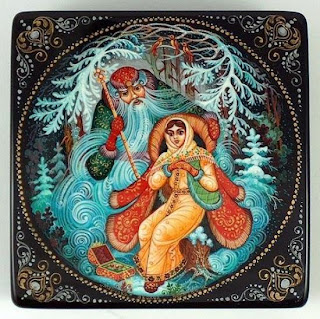 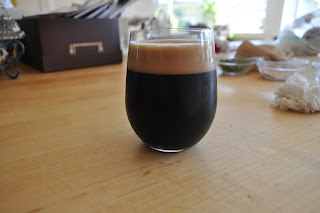 I have finally gotten around to doing a tasting of my Russian Imperial Stout; Ded Moroz. Ded Moroz (Grandfather Frost) is a slavic/Russian character that is a close approximation to Santa Claus or St. Nic. I brewed this beer Christmas of 2009. I know a long time ago even for an imperial stout. I brewed this beer to be a close approximation to North Coast's Old Rasputin. Rasputin is a very well balanced beer and at 9% abv, is on the smaller side of most domestically produced RIS. It is not overly hopped nor too sweet and malty, to me it is a beautifully balanced beer. That is what I shot for when I brewed Ded Moroz. When this beer was young the hop bittnerness was very strong and actually too harsh in my opinion. So, I let it age, and age. About 6 months ago I put a little gas on it to see where it was and wow has it come a long way. I carbed it up this fall and have been stealing small amounts at special times (yes I have been hoarding this batch). I also wanted to bottle a few beers off the tap for comps, so I didn't let too much go. I am entering it into The Bruery's Batch 300 competition and a fireside sipper competition on RateBeer (supposedly BrewDog will brew the winners beer). These are more for fun than anything else. I also want to bottle some for this years NHC, which the finals will be held in my home town of San Diego. I am pretty proud of this beer and if you look at my brew calendar you can see I will be brewing it again in October (if I can wait that long). Now on to the tasting.
Appearance: Jet black with a great dark tan (dark kahki) colored head that is thick and creamy and although it diminishes in size, there is small but dense head that persists.
Aroma: Chocolate and coffee aromas up front followed quickly with dark fruit and a nice vinous-like characteristic to finish. Low to no hop aroma, and light alcohols. Very well balanced.
Taste: Dark Roasted malts, dark chocolate, hop bitterness, and warming alcohol all dominate in a nice balance. The roast chocolate flavors dominate and are followed by an alcohol warm and some fruitiness. As the beer warms the vinous characteristic fades. The finish is dry, roasty and has a slight hop bitterness.
Mouthfeel: The beer is creamy and rich, but not cloying. Low carbonation that makes the beer creamy.
Drinkability: For a bigger beer, it is easy to drink. As it warms the bigger flavors take over and it becomes harder to drink, but for the style it is very well balanced.
Posted by Jeff at 12:12 PM No comments: