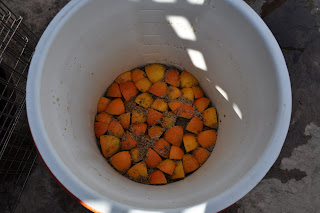 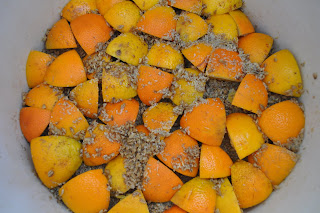 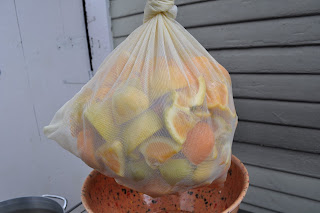 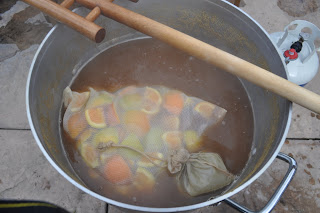 For my work holiday party I will be brewing 2 unique beers. I have made two other beers for last year's holiday party and last year's end-of-the-year party. I say unique because I incorporate a food item that is left over form our student's school lunches. I figure the food is gonna go to waste so I might as well create a beer that incorporates the waste for the staff parties. The two previous batches can be read about here: Graham Cracker Southern Brown and American Wheat with Peaches.
This year I will be brewing two 5 gallon batches, since at the previous two parties the beer seems to blow way too quickly. One will be a Brown Porter with Caramelized Raisins and Rum Soaked Raisins (Rum Raisin Porter). The other, I brewed today. An Orange Pale Ale.
Malt:
9# 2-Row
1# Honey malt *
1# Wheat Malt
.25# Crystal 40
Hops:
.5 oz Cascade @ 60
.20oz Simcoe @ 60
.5oz Cascade @ 30
.35oz Cascade @30
.5oz Cascade @1
.5oz Simcoe@1
Yeast:
US--05
Notes:
Added 6 oranges cut into 1/8 into the mash. Added 20 oranges cut into 1/8 and placed in sack into boil for last 20 minutes of the boil. Added 1.30oz orange zest in hop sac last 5 minutes. Wort had a nice orange sweetness that I think will balance out well with the hops, to make it a very drinkable beer.
I also racked my 1+ year old Funky/Sour Pumpkin Saison into a keg and added 3 Chardonnay soaked oak cubes to the keg to add even more complexity.
I also brewed a October Beer (see Mosher's Radical Brewing). Essentially it is a Strong Ale made with Marris Otter and Golding Hops, both fresh from the Fall Harvest. I augmented the malt with a little Honey malt* and a tiny bit or crystal. Should be about 8%.
*I read an article recently about Kern River Brewing Company here in CA. The brewer there makes a great IPA called Just Outstanding IPA. The brewer says that he uses honey malt to balance out his beers as opposed to Crystal. Since I typically like a lighter colored and less sweet IPA/APA I decided I would try and sub some crystal malt for the honey malt. We will see how it turns out.
Up soon will be a RIS tasting, Festbier tasting. Hopefully I will be brewing more and posting more.
Cheers!
Posted by Jeff at 6:06 PM No comments: