Wow, my last blog post was well over a year ago. As I mentioned I started my doctoral program and have little time for much extra-curricular activities. In the past year I have brewed less than I am used to, but I have been able to knock out a few beers. I won't do much of a recap here (I'll save that for a later post) but I have almost exclusively brewed sour or funky beers. I decided last winter to give up on trying to brew clean beers (at least any with any age on them) and so I have started to develop two house mixed-strains (brett, lacto and sac.). I have nailed down a solid Berliner procedure and have brewed several Berliner and Gose, again an update will come later.

For my Autumn Saison I decided to brew a pumpkin inspired beer. However, instead of a pumpkin spice slant, I went for other fall flavors of pumpkins, dark brown sugar, toasted pumpkin seeds and fresh sage. The squash/pumpkin and their seeds were from a local farm that we are a CSA member of (Suzies Farm). The sage was grown in my yard and I purchased dark brown Muscavado sugar. I cut up the squash, de-seeded, and roasted the squash with some brown sugar. I then toasted the seeds to  a deep brown toast level (they had a nice toasty, nutty flavor). I threw the roasted squash and crushed toasted seeds into the mash. I added the muscavado sugar to the boil and threw in some Ultra hops at the start of the boil for the lone addition. At flame out I threw in about 12 fresh sage leaves. I chilled and then pitched my House Blend #1 (WLP 644 "Sacc Trois" and WLP 670 American Farmhouse) it was the second generation of this blend. The beer has a wonderful orange hue, a nice aroma of burnt sugar, molasses and sage. I'm looking forward to having this beer with Thanksgiving dinner. My next beer will be a Dark Winter Saison inspired by Lost Abbey's 10 Commandments and Mike Tonsmiere's annual dark saison beers. 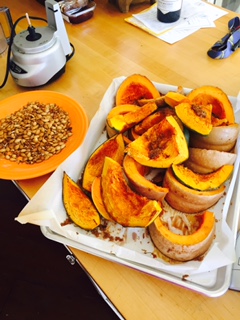 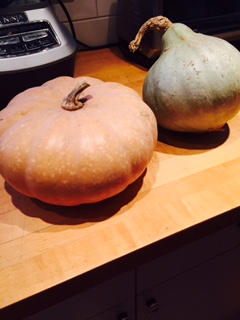 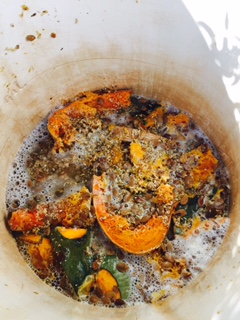